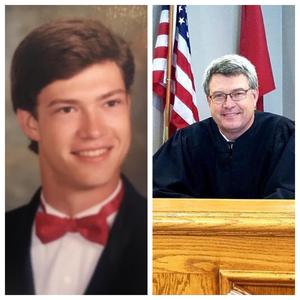 Chancellor J.B. Cox has been selected as one of the newest inductees in the Lincoln County High School Hall of Fame. Cox will be inducted in the Alumni Division.
In high school, Chancellor Cox was a member of the Beta Club and the Leo Club.  He played Football for 2 years, Golf for 3 years and Basketball for 1 year. He was active in 4H, showing cattle, livestock, and dairy judging teams.  He also was a State winner in 4H in the categories of economic project and soil judging team. He was President of the Senior Class of 1986, and graduated with an Honors Diploma.
Chancellor Cox is a 1989 Magna Cum Laude graduate of MTSU and a 1992 graduate of the Vanderbilt School of Law.  Since 2000, he has been serving Bedford, Lincoln, Marshall, and Moore Counties as the Chancellor of the 17th Judicial District.  Luckily for him, he has been married to Nancy McKinney Cox for 29 years.  They have two children: a son, Ben Cox, now a junior at UAB, majoring in mathematics, and a daughter, Julia Cox, a sophomore at Fayetteville High School.  He and his family live in the Howell Community in Lincoln County, Tennessee. Chancellor Cox currently is President of the Tennessee Trial Judges Association, Chairman of the Legislative Committee of the Tennessee Judicial Conference, Vice Chairman of both the Weighted Caseload committee and the Compensation committee. He is also a member of the Tennessee Bar Association.  A long time scouter, he serves on the Executive Committee of the Middle Tennessee Council of the Boy Scouts of America. He is an elder at the Washington Street Church of Christ in Fayetteville. His hobbies include playing in the Fabulous Fifties show, running (slowly), bicycling (even more slowly), hunting and farming.
Print