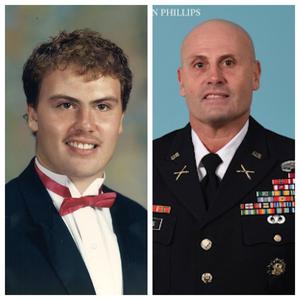 COL Phil Brooks is from Fayetteville, Tennessee and was commissioned as an Officer in the United States Army through ROTC.  He graduated from Lincoln County High School in 1986, earned a Bachelor of Science Degree from the University of Memphis and a Masters Degree in Arts and Science from the Command and General Staff College in Fort Leavenworth, KS.

COL Brooks served in Baumholder, Germany from 1994-1997 and deployed to Bosnia for Operation Joint Endeavor.  Upon completion of the Field Artillery Captain’s Career Course, he was assigned to Fort Benning, GA where served as a Human Resources Officer, Fire Support Officer, and Commander from 1997-2001. He then served as an Aviation Brigade Fire Support, Cannon Battery, and Field Artillery Battalion Tactical Operations Center Trainers at the National Training Center in Fort Irwin, CA from 2001-2004. He has deployed to Iraq in support of Operation Iraqi Freedom three times where he served as the Executive Officer to the Commanding General, Civilian Police Assistance Training Team, Executive Officer to the Commanding General, Multinational Division-Baghdad, Battalion Operations Officer, and as the Brigade Executive Officer and as a Battalion Commander in Mosul, Iraq. He also deployed to Afghanistan twice in support of Operation Enduring Freedom. He Commanded Battalions in both Iraq and Afghanistan and served as the Deputy Chief of Staff in Regional Command East in Bagram. As the 1st Brigade, 3rd Infantry Division Commander, he deployed to 10 countries throughout Eastern Europe between 2015 and 2017.  Since 2017, he has been assigned to the Pentagon as the Department of the Army’s Chief of Contingency Operations, and is currently the Chief of Staff for the Army’s Strategy, Plans, and Policy Directorate.