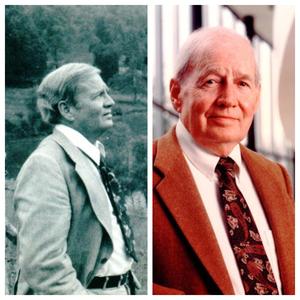 Five new members have been chosen to enter the Lincoln County High School Hall a Fame. Mr. William Robert Carter will enter the hall of fame as a Community Contributor.

William Robert Carter (July 8, 1921 – Aug. 23, 2006) grew up in Coldwater where his parents were the superintendents of the Lincoln County Poor Farm, a charitable institution that was largely self-supported by its residents’ efforts to raise crops and livestock. He earned a degree in civil engineering from the University of Tennessee at Knoxville and would go on to teach civil engineering at his alma mater and then enter the U.S. Navy. An officer, he served aboard the USS Harding, a destroyer that supported the D-Day invasion and another landing in southern France before going on to the Pacific to help in the battles of Okinawa in 1945.

Returning home to Fayetteville after the war, he married his high school sweetheart, Jane Strong, and co-founded two companies. In 1952 he and his partners would merge those firms into CFW Construction Co., which would go on to become of one the largest engineering and construction companies in the United States in the 1960s and ‘70s.

A visionary, Bill wanted to see his native Fayetteville grow and prosper. In addition to building homes, expanding the city’s infrastructure, and employing a large workforce, he would also dedicate resources to a number of worthy community endeavors, from an addition at Central High School to helping local businesses recover after devastating tornadoes of 1952 and 1974.

In the late 1970s, as plans for the new Lincoln County High School were undertaken, Bill again gave of his time and resources to construct of one of the most preeminent high school football stadiums in Tennessee. The end result, also widely supported by the community, stands today as Meadows-Thompson Stadium, hailed simply as “The Pit” by many.

He and Jane raised one daughter and two sons in Fayetteville. The family now includes seven grandchildren and 11 great-grandchildren.

In 2005, just a year before he passed away, Bill shared his life story in his book, “Unto the Hills”, the name of which was taken from one of his favorite passages in the Bible: “I will lift up mine eyes unto the hills, from whence cometh my strength.” (Psalms 121:1)